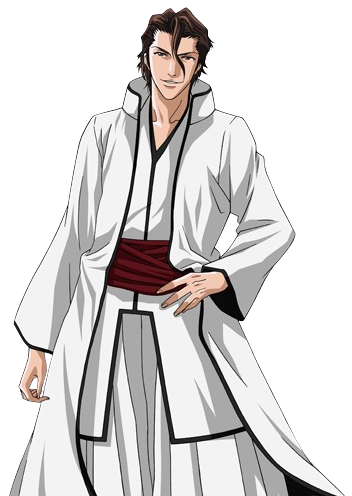 Weapon:http://www.qqcosplay.com/BLH/img/blhfveswd03.jpg
Weapon In Bankai form:Not Shown yet
Bankai Form:Not Shown
Race:Shinigami
Bio:Aizen is a soft-spoken intellectual, accented by glasses during his time as a Soul Reaper captain. While he appears to be very kind to his subordinates, he cares very little for them in truth. According to Aizen himself, he is not bound by morals and will therefore stop at nothing to further his ambitions, including manipulating or killing anyone if he deems it necessary. Tite Kubo stated in an interview that "part of Aizen's appeal is that he's mysterious," and for this reason he didn't think it's a good idea to go too much in-depth with the character.

Aizen controls his new minions either through acquired respect, as revealed through Ulquiorra Schiffer's conversation with Orihime Inoue where he tells her that they are all here to further Aizen's ambition, or through fear, such as when he threatened to kill Grimmjow Jeagerjaques if he attacked Kaname Tōsen. It was also stated by the arrancar Iceringer that they follow Aizen because he has no fear, which beings born from fear and despair find inspiring. Other arrancar occasionally have reasons for following Aizen unique to themselves, such as Szayel Aporro Granz, who follows Aizen with the hopes that he eradicates the world of all non-hollows.

It has been conjectured that Aizen's true objective is to overthrow the king of Soul Society. To do this, he needs the royal key (王鍵, ōken?), a tri-pronged golden key that opens a portal to the dimension that the king resides in. While the location of the key is known only to General Yamamoto, Aizen knows how the original was created and how to manufacture another. In order to create the key, Aizen needs to gather 100,000 souls in Karakura Town,[1] which has an unusually large concentration of spirit particles. Aside from killing the many souls used in its creation, creating the key will also vaporize most of Karakura Town.
Aizen, in his new clothing after his defection, alongside Gin and Tōsen.

During their ascent to Hueco Mundo, Aizen removes his glasses and sweeps a hand through his hair, revealing menacing eyes and a very different hairstyle. As he had previously revealed to Renji Abarai that the Aizen they all knew never existed, this would seem to be a visual representation of that claim. Before he leaves, he tells Jūshirō Ukitake that no one had started out in heaven, not even God.[2] He then says that he will be the one to stand in the heavens and end the unbearable vacancy on the world's throne. Aizen is later shown in Hueco Mundo wearing clothing similar in style to the arrancar he has been creating; he is also seated on a throne, implying that he has some level of political power.
_________________
Bankai Form